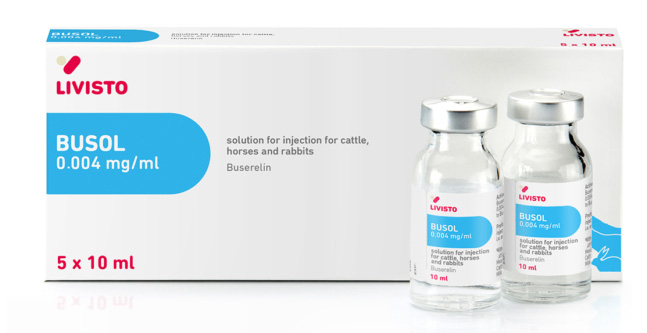 Busol is the only product licensed in the UK for the improvement of conception rates in mares by reduction of early embryonic death.

Many studies have that administering buserelin early in pregnancy improves pregnancy rates.

In this same study two groups of 187 mares received either 40mcg of buserelin or placebo, administered 10-11 days after ovulation. Ultrasound determined pregnancy rates at 14-15 days after mating were 57.2% in treated mares vs. 53.5% in untreated controls.

Pregnancy losses at day 28-30 were 6.5% in treated mares vs. 12.0% in untreated controls.1 In a follow-up study to confirm these results, 2346 mares were examined over a 4-year period. Analysis of the results confirmed that administration of 20-40mcg buserelin 8 to 12 days (average 10 days) after service increased pregnancy rates by an average of 10%.

In a study of 250 warmblood mares, 40 mcg of buserelin was given 10 days after AI using fresh or fozen semen. The mean pregnancy rate in the treated group was 48.4% versus 36.4% in the untreated controls.5

Based on these studies a protocol of administering 10ml of Busol to mares, 10 days after ovulation, to increase conception rate by 10% is proposed. We hope this information is useful. If you have any further questions, please do not hesitate to call our Veterinary Team on 00353 (0) 1 841 7666 or email us at vets@fortehealthcare.com.

1. Pycock JF and Newcombe JR. (1996) The effect of the gonadotrophin-releasing hormone analog, buserelin, administered in diestrus, on pregnancy rates and pregnancy failure in mares. Theriogenology. 46: 1097-1101.